The first Johnson string quartet, premiered by the Brindisi Quartet in 1994 and recorded by DRS Radio, Bern. Eight movements, each following a mathematical formula.

Formulas for String Quartet as part of the Illustrated Music video series available in YouTube: 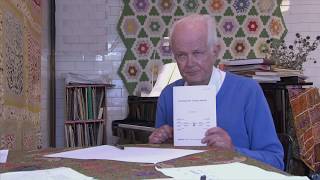 Nothing I can say here will clarify the tilework idea more vividly than this piece, where one hears how four simple tiles can criss-cross in so many ways. Michael Schmid is the flutist with Ensemble Ictus in Brussels, and he developed his impressive almost memorized performance of Tilework for Flute in a series of Ictus concerts. It seemed like a fine idea to include a good recording of this piece, with me reading the texts, so when Schmid came to Paris in November 2008, we made a date with Daniel Deshays in Châtillon to make this studio recording.

Tilework for Oboe is subtitled “Three Crossings.” In each movement some music starts at the left side of the staff, some other music starts at the right side of the staff, and with each successive staff they advance toward one another and eventually cross through one another. Quite a few oboists have tried this score, but I think Marika Lombardi is the first one who can play it without mistakes. I was delighted when she said she would record it in a studio, along with some baroque repertoire, which she also plays very well.

Several first rank clarinettists have played quite well the Tilework for Clarinet, but I was most moved by the recording I received one day from Cristo Barrios, a young musician from Tenerife (Spain), previously unknown to me. This live concert recording, made at the Conservatorium van Saxion Hogescholen in Enschede (Netherlands) in April 2004, as part of a recital tour he was making in Europe, shows dramatically how a single clarinet can become two clarinets – or six.

In January 2006 the ensemble Compagnie CH.AU, invited me to Vevey, Switzerland, to hear an all-Johnson concert they were playing. All the musicians were fine, but the interpretation of Tilework for Saxophone, played by the ensemble’s director, Laurent Estoppey, was extraordinary. How could he play one tile so softly and others so loudly all at the same time? I told him I felt his interpretation would make a wonderful addition to a tilework collection, so he made this recording in a Lausanne studio called Audio Link.

Arnaud Boukhitine is the tubist of the Ensemble Intercontemporain, and we came to know one another after his performance of my Monologue for Tuba. My music is rather different from Boukhitine’s usual repertoire, but he was willing to try the Tilework for Tuba as well. When we met a few months later, I realized that what I had written was really too demanding for the tuba. I added a couple of pauses and eliminated a few lip-destroying repeat signs, and Arnaud did the rest necessary to make the piece work. We recorded it with Deshays in August 2008.

After seeing and hearing the interpretation of Nine Bells (1979) in Dijon by the American percussionist Adam Weisman, I encouraged Weisman to take another look at Tilework for Percussion, and a few months later I was delighted to receive this recording, which he made in his own studio in Berlin. Usually when percussionists try to play this piece we don’t hear tilework at all, but rather single lines, with everything connected. Weisman, however, understood that we want to hear the individual tiles/voices and how they fit together, even though this makes the performance task much more difficult.

For one interested in one-dimensional tiling, some mathematical curiosities can be found in most of these “seven pieces of tilework”, but Tilework for Piano has actually stimulated some serious research in mathematics, or at least in mathematical games. I pointed out in a 2003 article that the piece demonstrates the simplest tiling of a line with the different voices all playing three notes in different tempos. The tempos, from bass to treble, are 7 to 5 to 4 to 2 to 1, and this is the only solution with five voices. This observation was repeated in a long article about my music by Jean-Paul Delahaye (Pour la Science, May 2004) and people have been programming their computers ever since to find “perfect tilings” with more than five voices or more than four notes.
I am particularly pleased to have this recording of John McAlpine, because he has played much of my piano music over the years, and he understands it particularly well. He has performed this piece many times, but this early live concert interpretation, with its extreme dynamic contrasts, has a brashness that I appreciate as much as the refinements that came later. The recording was made by Peter Mohr at a concert of the Cologne Society for New Music in May 2004.

Having played my solo Failing quite a few times, Jean-Daniel Hégé wanted to work also on Tilework for Double Bass, but like other bass players, he found that knowing the first piece didn’t help at all in learning the second, and he couldn’t figure out how to interpret the tak-tak percussive element. I assumed that this would be played by tapping the bow on the bridge somehow, but this proved to be an unsatisfying solution for him. In discussing this problem, Hégé remembered that ever since childhood he knows how to make a loud click with his tongue, a sound I immediately loved, and that no one but Hégé will ever really be able to do. This problem solved, we made this recording on November 28, 2008, again with Daniel Deshays.

A personal rendition of one of the counting pieces of Tom Johnson. With the score available since April 2014, soloists are encouraged to transform the pieces, with their own accent.